For the year and a half that I've been here in Rwanda, one of the most striking things I've noticed is the rate at which everything changes. Rwanda's "vision 2020" plan, so named because it's goal is to eradicate poverty by year 2020, focuses on developing the most rural areas in order to develop the country as a whole. I've seen development at every level.

Village
My own village, Mibirizi, is growing fast, being somewhat of a hub center for surrounding villages. I know from the first hand experience of my move last year that it's difficult to find a house for rent in Mibirizi because of the increasing population of professionals moving in. Since I arrived in January 2011, electricity has become available in further and further reaches of plantain forests. Beer companies started shipping out refrigerators in order to promote their beer, so beer is cold now (though some people still prefer their beer "hot"). Bars started serving brochettes, then one bar started serving akabenzi and shortly after, not to be out of the loop, the parish of Mibirizi built a bar bigger than any other in town and started serving cold beer (even heineken), plates of food for lunch (rice, beans, meat, vegetables), as well as brochettes, akabenzi, and other typical bar fare. The imposing building, which, like the church itself, dwarfs everything around it, appears to many grumbling barkeepers be the final word on service in Mibirizi. However, if things change as they have in the past year, it surely isn't.
Town
In Kamembe, the nearest town to me, the market was one day shut down and merchants dispersed into various smaller markets throughout town. Contracted workers started construction of a massive 5 story complex which is now nearly finished and will soon become the new central market of Kamembe. It probably won't be finished by the time I leave in November and that's disappointing. I try, but I really can't imagine how the intensity of the rowdy, outdoor market crowd will operate in an enclosed space.
City
In the supercity, Kigali, supermarkets are popping up everywhere. The center of town, which used to have two big supermarkets, Simba and Nakumatt, now has four, adding another Nakumatt location and an asian supermarket called T2000. The big supermarkets are impressive-- spacious like supermarkets in the USA, but not as chilly. There are also many good smaller supermarkets around the area. Restaurants are everywhere too, serving everything from traditional Rwandan buffet to korean barbecue to pizza and greasy fried chicken. 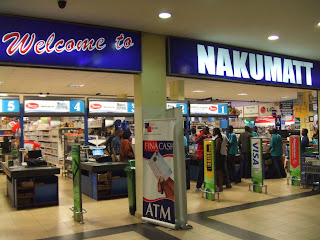 Country
Country-wide development for Rwanda is all about improving infrastructure and connections. Many roads are being repaired, including the one that passes through Nyungwe Forest and connects my rural corner of Rwanda to Kigali. What used to be a 6 hour bus ride is edging closer and closer to 5 hours with each trip (best time 5h 13). Additionally, Rwanda has achieved the 4th fastest internet connectivity in Africa, and plans to improve their broadband access in the near future (according to the New Times, a Rwandan paper). Other government development initiatives include increasing mobile phone connectivity among Rwandans, moving people into real houses (the government knocks down grass huts)*, and instituting public health insurance.

The excitement for all the change comes with fears, though. Every once in a while, I read about a Peace Corps country being evacuated for security reasons. Niger, Guinea, and Mali are African countries which have been evacuated during my service. I can imagine how devastating it is. Nobody seems to see it coming. Overnight, friends are in danger and the progress that a volunteer participated in disappears. Volunteers are either shipped back to their old country to continue their american life as if their extra-america one never happened, or are shipped to a new country, which shares the same overbearing possibility of upheaval as the first one did.

It seems impossible for volunteers to change the world when the most important decisions are being made from the top and we're on the ground. But for now, it's all we can do. When I see people who, after seeing the PTSD state of Rwandans, can go on to Liberia because they have post-trauma experience, or people who simply return to the US as more world-weary people, I'm inspired. For many, Peace Corps is a jumping off point before they are able to do better things.

Still, I pray for things to go well here. I hope to be able to return to Rwanda some day and see that my old haunts have continued to grow and change. Mibirizi or Kamembe 20 years from now are beyond my imagination, and that's exciting.

*I've seen grass huts in a museum, in a tourism camping outfit, and used by soldiers. Otherwise, they've been abolished.
at 8:27 PM