Akabenzi is a fried pork dish, so called because the snout of a pig resembles the Mercedes Benz logo. Aka is a diminutive prefix, so all together akabenzi means little Benz.* 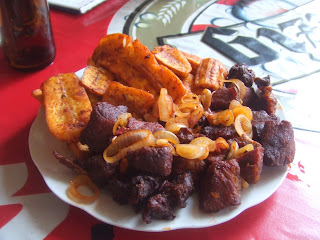 The dish is available in the bigger bars in Kamembe. Patrons order it by the kilo, usually with plantains as a side. The meat is cut into small pieces so that you can eat it with your hands (you wash before and after) and served with fried onions and with bell peppers, if available.

Akabenzi is only found in the southwestern districts of Rwanda. The typical Rwandan diet is high in starches and beans, but scant on meat. And while cows are valued highly in Rwandan culture, pigs do not command the same lofty status. The presence of pigs in Kamembe is due to influence from the nearby Congo, where meat is a regular part of the diet.

*A final i is pegged on to many adopted words because consonants are always followed by vowels in Kinyarwanda. Some funny examples: ishati- shirt, biki- bic pen, gushargingi- to charge, telefoni, ijerricani.