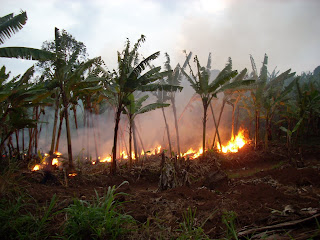 Recently, the Rwandan government has been chopping down banana trees in my area.
They are targeting the kinds of bananas that are used to make banana beer (rwagua). In the photo above, my neighbors are burning brush in their plot in preparation to plant beans instead of bananas. When the government cut down the trees, they left those trees which still had fruit. That's the reason there are still some trees on their land.

What caught my attention when I was walking home was that the people who either own or sharecrop the land were not present. Instead, four or five grade-school-age kids were running the operation-- and having the time of their lives throwing the dead banana leaves into the fires. I think that being a kid in this country would be hard (lots of work to do around the house, no tv, no washer/dryer, no stove), but there are definitely some perks!

Mibirizi is not prone to wildfires, even at the tail end of the dry season. Also, after about an hour of firing the brush, it started to rain-- a detail I'm sure was accounted for in planning the burn.
at 2:29 PM