English Together! is the name of my English club. The first meeting was this Saturday at 2 P.M. I planned the club with a local Doctor, Dr. M. We planned to invite teachers, students, and hospital staff. 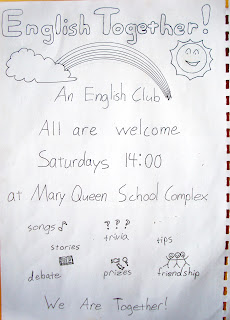 In many ways it was a typical Rwandan affair, starting about forty minutes after the appointed time. Though many teachers had said they wanted to come, none were in attendance. This was something I had expected and I wasn't too much bothered by it. The hospital staff wasn't informed about the club, so no hospital workers were in attendance. A few students were unfortunate enough to be on time and had to wait for others to come, but luckily there was a drum in the classroom for us to play with. Small groups of students occasionally drifted by to see, but were too shy or indifferent to come in until I walked outside and told them they were welcome. And so our membership slowly grew in this way until the room was filled.

Here is the first meeting's program:
1) Introductions- Each member introduced themselves and says a short phrase like "nice to see you."
2) The Purpose of this Club- Dr. M made a short speech about the goals of the club. Namely, to spend more time speaking English and to make friends you can practice English with.
3) Story Time- I told the story "The Tortoise and The Rabbit," accompanied by illustrations and an occasional translation to make sure the meaning was clear.

4) Quiz Time- Members answered trivia and grammar questions and got small rewards like candy.
5) Lesson- A small grammar lesson: "I'm going at school" is a mistake. Say "I'm going to school."
6) Topic- The idea here is to have a short debate or raise an issue which needs thought. For the first meeting, Dr. M prepared a story about John and Furaha. They are engaged and in love, but their parents do not approve of the match. The club was then asked what John and Furaha should do. Since the attendance was entirely junior-high-aged students, the unanimous consensus was that John and Furaha should ignore their parents wishes and marry for love.


The club went pretty smoothly, but the true test of whether it was successful will be to see whether attendance is good at the next meeting. For the next meeting, I have prepared some poster advertisements to put up at the hospital and schools. We will probably make quiz time the last event, since it was by far the favorite. We will add a song to the beginning of the program in order to entice the members to be more timely. Mimi will come to visit next weekend, so I hope to give her a role in the schedule.

For the long term, my primary goal with the club is to gradually transfer responsibilities to members so that the club can exist when I leave Rwanda (and so that I can occasionally take a break on the weekend). If the club continues after my service, I will have achieved "sustainable development," which is what Peace Corps aims to provide.
at 8:56 AM